Thanks for the adventure 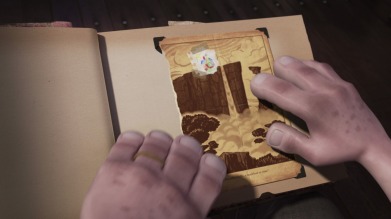 The one she showed Carl when they were kids, where she left space for all the stuff she was going to do.

The one Carl reminded her about when they found out they couldn’t have children. 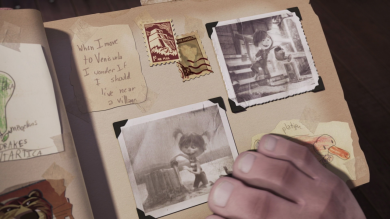 The one Ellie passed back to Carl from her hospital bed, giving him a message.

But he didn’t receive that message right away. The book stayed forgotten in a closet, just like how the Paradise Falls jar gathered dust on a shelf.

It’s not until much later in the story, when Carl seems at a loss for what he’s supposed to do, that he returns to the book.

He puts the picture of their house atop Paradise Falls into place and flips through the pages Ellie filled as a child.

Then we see it:

As Carl goes to close the book, he catches sight of something.

The pages after aren’t blank.

Ellie has been quietly filling them.

Maybe all at once from her hospital bed, where she had tape and crafting supplies next to her.

Those pages are full of the kind of memories we saw in the Married Life montage.

The moments of Carl and Ellie together.

And then comes the final inscription:

Carl’s guilt carried him here. It made him do amazing things, like fly a house to South America using nothing but balloons and ingenuity. It made him drag that house by a rope for miles across unfamiliar territory.

But it also shut him off to new friends and new possibilities. Guilt wasn’t helping him to have a new adventure, or even appreciate the adventure he was on.

It reminds me of a quote that I come back to a lot:

Carl’s moment of great adventure doesn’t come until he realizes he’s been on one this whole time.

Ellie’s final message gives him the permission to see the value in caring about new people. Or birds. About giving himself a chance to see that there is potential for value and joy in every moment he has left, even if it’s not with her.

We saw how much of their life was a pattern of routines. The trips to their picnic hill to watch the clouds. Getting dressed for work. Putting change in their Paradise Falls jar. To have those routines disrupted felt like a loss in part because of how strongly they were woven into the fabric of their life together.

Carl has held on to his belief that Ellie was his only source of joy just like he held on to every single thing in that house.

He forgot that he made her smile and laugh as much as she did for him.

He forgot that he put just as much work into their life together as she did.

He forgot that he could see pictures in the clouds, too.

Ellie may be gone, but Carl is different than he was when they first met. He is forever changed by their love. And it isn’t until he recognizes how he has changed that he sees how he can hold on to Ellie without holding on to a house full of old things. How those old dreams weren’t just collecting dust, but weighing him down.

It’s a cathartic moment when Carl throws all of those things out of the house to help it take off once more. When he knows that his adventure isn’t finished.

Because that’s the thing about this movie: It’s about those balloons. It’s about learning not to be weighed down by guilt, sadness, and disappointment. It’s about seeing that if we can cast off those burdens, we too can rise up.

That we all are already on a great adventure. 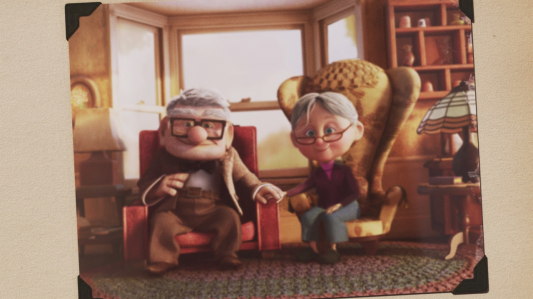