Last semester I chose to take a stand on student phone use in class.

I wasn’t just getting the occasional person doing a bad job hiding that they were texting in the middle of class. People would take out their phones multiple times during an hour-long lecture. People would keep earbuds in. People in the front row would sit staring at their phones for extended periods, right in front of me.

Talk to any educator and you’ll get plenty of kids-these-days gripes on the subject (as if kids always paid 100% attention to classes before phones). But phones do present a particular, difficult problem.

Teaching at a university instead of at a high school or middle school, I didn’t want to use an authoritarian demand for phones to stay out of the classroom with draconian penalties would only make students work slightly harder to hide phone use, and would force me to distract myself from teaching to enforce it.

I had to think about the underlying problem. If this were just about making sure I had all eyes on me for the entire lecture, it would feel like an ego problem, and it would be easier to deal with that by adjusting my expectations and taking some time for self reflexion. I could solve that problem more easily than convincing a room full of adults to stop touching their phones.

But looking at the work my students turned in, I saw there was a different reason to question their phone use: focus. With so many students getting marked down on their assignments for unforced errors that showed they weren’t focusing, I had a larger beast to slay than students not paying attention in class.

They weren’t paying attention to what they were doing, full stop.

Whatever solution I proposed had to be voluntary (so I could avoid the enforcement problem). It had to be persuasive. It had to use social pressure.

That’s when I came up with THE BE HERE NOW BOX. 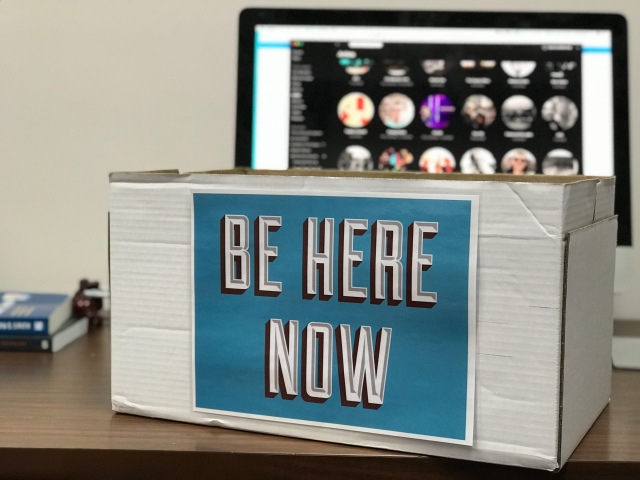 The best part about having a box is that you’ve got a physical prop. Something to hold up and point to. A novel object that draws attention.

I made my pitch: This isn’t about me — It’s about you. You’re not getting the class you’re paying for if you don’t pay attention. You’re giving up control of your attention by letting something distracting sit within arm’s reach for this hour. You may think that it doesn’t effect your attention, but studies show that multi-tasking not only reduces willpower but cognitive performance.

Being next to your phone distracts you, and you won’t even perceive any change in your attentiveness or mental ability.

So, if they were able; if they didn’t have any pending obligation or potential emergency that might require them to take immediate action, I asked them to make a choice: To take control of their attention and put their phone in the box. Make one decision this hour instead of having to make the choice to ignore your phone over and over throughout the hour.

It worked. Sort of.

Some classes participated more than others. The classes that needed it the most were also the most reluctant. But I saw an overall increase in participation, and the class that put the most phones in the box had the highest grades.

Anecdotal? Sure. It definitely wasn’t a controlled study. But it happened.

But that was last semester.

I knew I wanted to bring the box back for the new semester, but I wanted to refine my pitch. I figured if there was a way to pitch it more effectively, I could get more people to try it out. If I could find a better argument, better facts, or a more persuasive opening statement…

If I could do a better job, maybe more people would give it a shot.

But what did it actually mean to do a better job? How was I measuring success? More students putting aside their phones? More consistency from the students who initially tried it out? Students telling me they made their own box at home? Better student performance on assignments, showing an increase in mindful attention?

What was a win?

I was stuck, so I decided to try blogging about it to see if I could generate a better sense of what I wanted to say. But that pointed my attention to another problem.

I have a backlog of unfinished ideas and drafts for blog posts. Some abandoned, some not even started.

Over the last year, I had some posts that were well-received. Some work I got paid to write. A few posts got more views in a month than the blog had seen in a year.

It was cool. I felt cool.

And then I felt like I needed to do more of the same thing. Or try to maximize the value of that new audience. Or just do something. Anything.

And the ideas kept piling up, but nothing got posted.

It wasn’t until I got deep into watching The Good Place that I felt like I had the language to describe what was going on with me. That feeling of my brain turning into a Möbius strip of indecision, twisting and circling with justifications, re-evaluations, and new new directions.

Nothing felt good enough, because nothing felt like it was definitely that one thing that would move me forward. That would take the “I’m a Writer” part of my career to the next level. To even help me figure out what level I was on.

There’s a passage in Shunryu Suzuki’s Zen Mind, Beginner’s Mind about fruitless work towards a goal:

One day while he was studying under Nangaku, Baso was sitting, practicing zazen…

Nangaku saw him sitting like a great mountain or like a frog. Nangaku asked, “What are you doing?” “I am practicing zazen,” Baso replied. “Why are you practicing zazen?” “I want to attain enlightenment; I want to be a Buddha,” the disciple said. Do you know what the teacher did? He picked up a tile, and he started to polish it. In Japan, after taking a tile from the kiln, we polish it to give it a beautiful finish. So Nangaku picked up a tile and started to polish it. Baso, his disciple, asked, “What are you doing?” “I want to make this tile into a jewel,” Nangaku said. “How is it possible to make a tile a jewel?” Baso asked. “How is it possible to become a Buddha by practicing zazen?” Nangaku replied. “Do you want to attain Buddhahood? There is no Buddhahood besides your ordinary mind. When a cart does not go, which do you whip, the cart or the horse?” the master asked.

The book is one of my go-to totems for when I’m totally freaking out, and I happened to flip over to this passage. Fortunate timing.

And then I remembered a post from CJ Chilvers on the why of blogging in the present moment:

The pros advise that long-form writing (going deep into a subject) is the best way to get any real attention and deal with the way Google, Facebook and Twitter have transformed how information is consumed online. You post something epic once in a great while, and promote over and over. Attention spans are shorter and readers aren’t using RSS anymore. If you want attention and sales, you have to go out and grab the attention, then offer something with extreme value to get the authority to sell something. They’re correct.

The hobbyists (and one prominent pro — Seth Godin) profess that it’s the opposite that has the most positive impact on your life and mental health: short-form writing, and just getting your ideas out there. They’re correct.

I’ve been thinking about this in my own life and career for the past month and I think I’ve come up with a theory: one is a business model, one is a life model.

​I’ve watched this site get stale; turning instead to the pursuit of likes and retweets, and the spending too much time chasing the empty satisfaction that comes from a “good” tweet.

I’ve spent so much time trying to re-define what success is, I stopped producing anything that could get me closer to… Well, any definition of feeling successful.

So, as I’m getting closer to my birthday at the end of the week, I’m resolving to be less precious this year. I’m resolving to stop treating a blog as a means to an end, but instead as an end unto itself. To focus on satisfaction instead of success.

Success is as much given as it is earned. Satisfaction doesn’t require outside intervention.

The only way I’ll be satisfied is if I learn to take pride in my words themselves instead of pride in how widely my words travel.

My phone isn’t the only thing I need to put away if I’m going to get real work done.